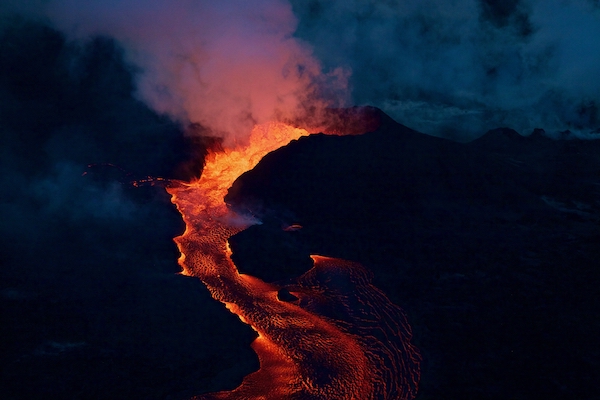 Puna is home to some of the island’s best beaches - one of which is the Kehena Black Sand Beach. After visiting the Red Road, are you ready for another scenic location rich in great Hawaiian history?

It has been known that in this part of the Puna district, the Kilauea Volcano has dominated daily life and history for as long as people can remember. Let us tell you some interesting tales about what has happened here as the Goddess Pele went about her volcanic business.

In 1985, a geologist named George Ulrich came to study the volcano. He was taking a sample of lava when he suddenly fell through the thinly-crusted lava. His legs were partially submerged in the 2,000 degree molten lava. Ouch! Luckily, his partner pulled him right out and his protective gear saved his legs from melting off. He suffered 2nd and 3rd degree burns, but lived to tell the story. The remains of the gear he was wearing were put on display at the Museum in Volcanoes National Park.

Along the way, we will see the remains of the 1790 lava flow. This was a huge, explosive eruption with a downhill lava flow that killed everything in its path. It was also the deadliest eruption in Hawaii’s history, killing hundreds. Up at the National Park, there are some human footprints preserved in the hardened lava fields where some unlucky guy, about a size 10, was standing before he died from the poisonous gases in this eruption.

Most residents though are accepting that Pele gives, but she also takes back. There once used to stand a 700-year-old Wahaula Heiau in the area. This heiau was the oldest temple built for human sacrifices on the entire Island. But in 1997, it was buried by lava in a matter of hours.

Mark Twain once said, "Buy land, they're not making it anymore." But in Hawaii, they actually still are, or at least Pele is. The question is, who owns the new land that is created by a lava flow? Well, in the last 20 years or so, Madame Pele has added about 500 acres of new land to the Big Island. A couple who owned land in Puna brought a lawsuit that made its way up to the Hawaii Supreme Court. The couple claimed ownership of the new land created by a lava flow which first passed over their ocean front lot. They argued that new additional land created belonged to the adjoining lot, effectively making their land bigger. The State of Hawaii eventually won the suit some 17 years later. In the meantime though, the couple had bulldozed the new land and grown trees on it, thinking that it was theirs. Well, guess not!

So, what happens to the owners of land that is covered by lava? Well, like Ben Franklin said, “nothing is certain except death and taxes.” Even if your land is completely covered by lava, you still have to pay your property tax. At least it was so for the residents who lost their homes to lava in the 1990s flow.

Now, although lava kills everything in its path and leaves nothing behind alive, eventually life will return. Just look at how lush Hawaii is now! You see, once lava hardens and cools, rain and the elements begin wearing down the rock. Little by little, seeds and soil arrive in the wind. Within a year, you can see ferns growing inside cracks in the lava. In 25-30 years, native plants will be a few feet tall. And within 50 years, the native ohia trees will be 20-30 feet tall. Once an ohia forest takes root, animal, bird and insect life returns.  You see, the island is resilient. Life is resilient!