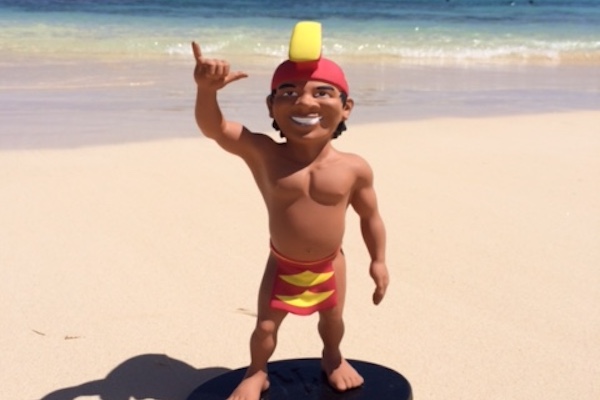 The Legend of the Gentle Giant Puni and Tiny Menehune

Did you know that the island of Kauai was formed from a gigantic volcano called Mt. Wai’ale’ale? The Na Pali  coast is located on the shoulder of this volcano. But unlike Waimea Canyon, which was initially formed when Mt. Wai’ale’ale collapsed, the Na Pali  coast was carved slowly and gradually by wind, rain and  waves - over millions of years. The result of mother nature’s handiwork is truly  breathtaking.

Despite what modern science says, there is an interesting Hawaiian legend that explains how this beautiful coastline came to be. A long long time ago, here on Kauai, there lived a gentle giant named Puni. He was a great friend to the menehune - or the little mystical people who lived on Kauai.

Puni would often travel with his little friends to visit the Kalalau Valley here in Na Pali. because Puni was so tall and the menehune were so short, Puni the giant usually ended up waiting for his friends for hours here at Kalalau. To help pass time, Puni began to sculpt the cliffs of the Na Pali into beautiful curved shapes. When his little friends asked him what he was making, Puni would tell them that they would have to wait till he’s finished and see for themselves.

One day back at their home  in Wailua, a fleet of enemy war canoes began to attack the island. The menehune tried to wake up Puni who was fast asleep, but their giant friend wouldn’t budge.

Desperate, the little people started throwing rocks at him to wake him up so he could help fight the enemy. Sadly, one large rock was thrown into Puni’s open mouth and the sleeping giant choked to death.

Well, unfortunately, Puni the giant never lived to finish his work. Maybe you can decide what you think he was sculpting out of the magnificent Na Pali mountains.

Want to see the beautiful Na Pali coast for yourself?

It's a stop on our Waimea and Na Pali Tour!