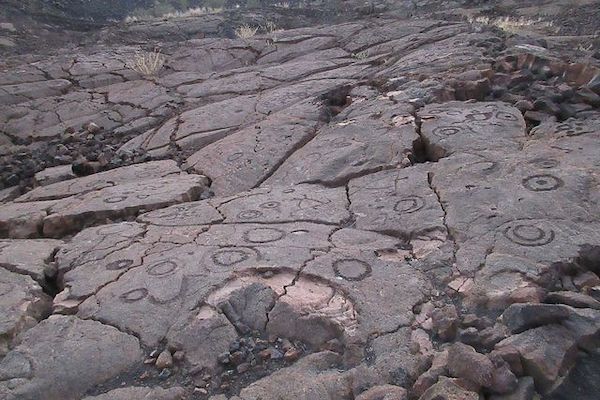 Historians believe that settlers from the Marquesas and Tahitian region arrived in Hawaii around 500 AD. These ancient people never developed a writing system, using only hula, chants, and songs to pass along their history. However, they did inscribe images in rocks, which we now call “petroglyphs.” Hawaiians call this form of rock art “k’i’i pohaku," or “images in stone.” The carvings were believed to have been created between 1000 and 1800 AD and are thought to represent births and other significant life events.

Hundreds, if not thousands, of petroglyphs are preserved in these parks. They immortalize valuable historical treasures in a sort of time capsule, even as hotels and developments rise up around them. It’s difficult to say exactly why the petroglyphs are located in their specific locations, and unfortunately, modern developments have erased the clues as to why they are where they are.

There is a short paved trail to a small collection of ancient petroglyphs. The path continues into the Kiawe forest. The path is short and uneven, so people of all ages can reach the end. There, you will find a large rock field of hundreds of petroglyphs depicting human, animals and geometric shapes. Imagine what it would have been like to be the native Hawaiians carving all of these primitive symbols in the rocks hundreds of years ago! What was their possible significance and what do they mean?

Now, we have to talk about stacking rocks! You may not think so, but it is actually quite disrespectful. The native Hawaiians truly honored the environment, so it’s best to refrain from rearranging these stones for photo opportunities, or simply to leave your mark. This desecrates land sacred to the Hawaiian people.

Another form of vandalism we highly discourage is lava rock graffiti. This is where people spell things or make shapes out of the white rocks on black lava. Similar to stacking rocks, it changes the natural landscape and is disrespectful of the natural flow of the land. Remember, we are only  guests on this island; we need to treat it with kindness, care, and respect, just as we would when invited into another person’s home.

Want to check out Waikoloa's petroglyphs?

Take a look at our Kohala Coast Backcountry Tour!