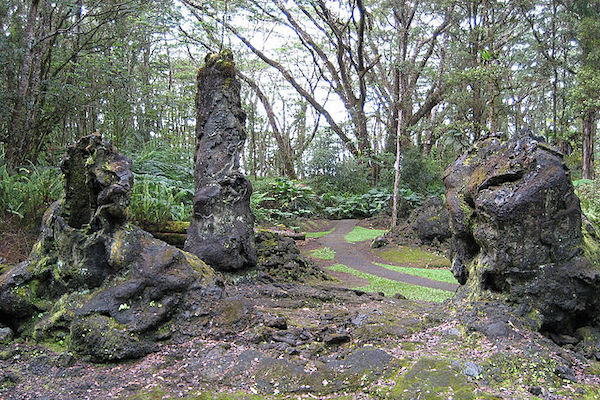 Have you ever heard of a lava tree? You can get some good views of the unusual ‘lava tree’ formation up close at Lava Trees State Monument! This is one of the only places in the world where you will find this crazy phenomenon - so go and have a look if you can!

Have you ever heard of a lava tree? Let us explain. In 1790, a volcano eruption sent molten lava rushing through the park. But instead of knocking over the trees, the lava surrounding a tree was instantly cooled by the tree’s moisture - and formed a column around it.  After the tree in the middle was burned up, what remained was a trunk-shaped pillar of lava rock, with a hollowed inner core where the tree used to be. Peek inside one and you might even see the imprint of tree bark!

At the park, there is a paved sidewalk that loops around, about half a mile. You will need less than an hour to stroll around the park. The pathway is mostly shaded, but sunscreen and rain gear might be a good idea - just in case. There are also pavilions with tables, if you want to stop for a picnic. You might luck out and see native Hawaiian birds that frequent this park! The little red ʻApapane and the larger ʻIʻiwi, scarlet in color with a deeply curved beak, can be seen here. If it’s the right season, you will find trees laden with small reddish fruit called strawberry guava, that make for a delicious snack. Although the fruit is juicy and sweet, these guava trees are highly invasive and are unfortunately damaging native forests.

On another part of the island, there is a relatively easy hike through what we call a ‘Kipuka’ - an oasis of old-growth forest surrounded by more recent lava flow from Mauna Loa. The 1.2-mile loop trail hike is a hotspot of biological diversity, with rare native birds such as the Elepaio, the scarlet colored ʻApapane, Yellow ʻAmakihi, or even the less common ʻIʻiwi, with its huge curved red beak. There might also be native Kamehameha butterflies amongst the Koa and Ohia trees. The National Park Service has produced a great leaflet called the Kīpuka Puaulu trail guide - you can download the PDF from their website.

Remember: the volcano area is known for sudden rain showers; at other times it can be hot and windy. It’s best to remember a hat, sunscreen, water, and rain gear. In other words, be prepared to ‘go with the flow’ as we say in Hawaii.

The loop hike could take between an hour and an hour and a half, depending on your speed. The trail starts at the Kipuka Puaulu parking area. It’s a dirt track with slight inclines and declines. Bikes, dogs, and horses aren’t allowed on the trail.

Want to check out volcanoes and lava?

Take a look at our Big Island Tours!