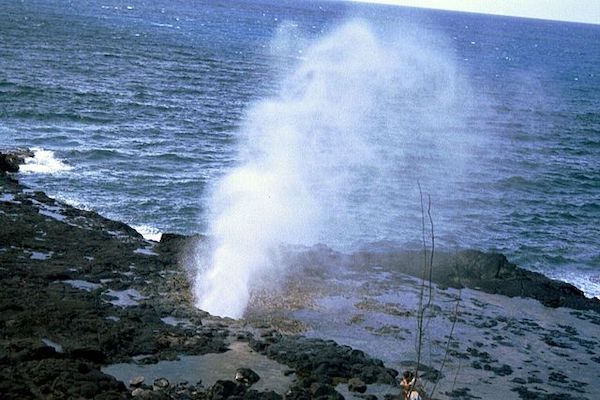 The Legend Behind Spouting Horn: An Imprisoned Lizard

Exploring Kauai? Make your next stop in Poipu, be Spouting Horn Beach Park! Let me tell you the interesting story of Spouting Horn.

Called puhi by ancient Hawaiians, Spouting Horn is a geyser-like blowhole. How it works, is there is a narrow chimney through the roof of an underwater sea cave. when ocean water rushes underneath the lava rocks, it shoots up through the opening - spraying salt water into the air. Each large wave creates another spray, sometimes reaching 50 feet in the air!

But many people say that they also hear this low roaring sound coming from the blowhole, almost as if a monster or giant sea creature is breathing or hissing through the hole. So, where does that sound come from?

According to legends, the coastline in this area used to be guarded by a giant lizard or mo’o. This lizard would attack and eat anyone who came close to its territory. One day, a young man named Liko came swimming here. When the lizard spotted LIko , it began chasing him. Seeing the monster coming his way, Liko ran for his life and dove into the underwater sea cave. The lizard followed him and slithered down the blowhole.  But it was too big and the lizard got stuck. To this day, the giant lizard is still stuck in this narrow cave. To this day when the spouting horn shoots water into the air, you can sometimes hear the low roar of the lizard, or mo’o.

Kind of a neat legend, isn’t it? Well, if you are curious to know where the roaring sound really comes from, it’s actually caused by pressurized air forced through the cracks in the rock. Hm…not as fun isn’t it? I think the giant lizard version of the story is way better, don’t you think?

In addition to Spouting Horn, there used to be a much larger blowhole nearby called the Kukui’ula Sea Plume. It would shoot saltwater almost 200 feet into the air - what a sight that must have been! That’s higher than the Old Faithful geyser. Unfortunately, during the sugar plantation era in the 1920s, it was determined that the salt spray was causing damage to the sugarcane crops. So, in his infinite wisdom, the plantation owner dynamited the hole and got rid of it. What a shame! If that were done today, I am sure he would  be in big pilikia - big trouble. But, hey, at least we still get the spouting horn, eh?

It's a stop on our Poipu and Koloa Tour!