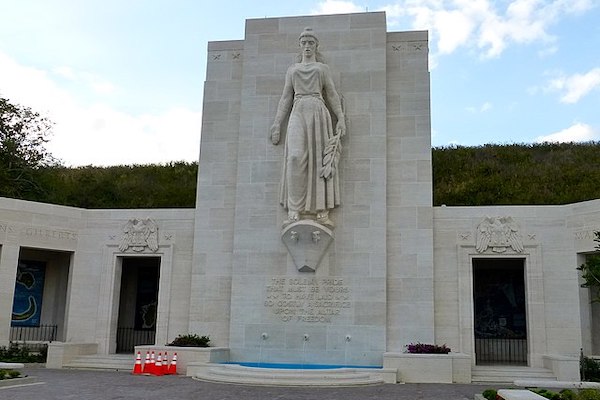 Punchbowl National Cemetery - A Memorial with a Dramatic Setting

The Punchbowl National Memorial Cemetery of the Pacific is an important monument for many Americans, and has the most dramatic natural setting. It was created in the late 1940s, after Pearl Harbor, and the 112 acres are the final resting place of around 53,000 veterans from World Wars I and II, the Korean war and the war in Vietnam.

It’s got a new visitors’ center - it’s small, but has a grave locator available as well as war artifacts, including medals of honor donated by family members of veterans. WWII vets are sometimes on hand to answer questions.

Now, there are two loops in the Punchbowl. The inner loop goes into the cemetery itself, through beautifully manicured grounds and rows of American flags. The outer loop goes up the hill and will give you a great view of Diamond Head.

Many of the flat graves have flowers or leis on them from people who want to honor the dead. There’s a white marble monument at the center for the soldiers who died or are missing in action. The USS Arizona is also remembered with a bronze plaque - it sank at Pearl Harbor in the attack of 1941.

Let’s talk about what inspired the construction of the cemetery. In 1947, the military was under pressure to find a spot where fallen soldiers from the pacific theater could be buried, as they had many American dead in Guam and elsewhere that needed permanent burial sites. The remains of soldiers from locations across the Pacific were sent back, and buried once the cemetery was complete. It opened to the public on July 19th, 1949.

The inner loop is shaded by Banyan trees and leads to the white marble Honolulu Memorial Monument.

Here, marble stones in the ten courts of the missing list the names of 28,788 military personnel missing in action or buried at sea. They stand by the memorial’s grand stone staircase. Lady liberty rises 30ft  above the top of  the staircase in the court of honor. She is said to represent grief stricken mothers. The inscription below her is from Abraham Lincoln: “the solemn pride that must be yours, to have laid so costly a sacrifice upon the altar of freedom.”

Some of the graves contain the remains of unidentified soldiers. Work to identify them continues to this day. In fact, in August 2001, about 70 “unknown” markers were replaced with “USS Arizona” markers once it was discovered the men died in the Pearl Harbor attack.

From the parking lot, it’s a short walk up the hill to the overlook on the edge of the crater. Along the way, there are many small memorial plaques. You’ll also see maps of the many wars fought around the Pacific by the Army, Navy and Marine Corps.

Buried at the memorial are several notable people. They include astronaut Ellison Onizuka, who died in the Challenger shuttle disaster; as well as Obama’s grandfather, Stanley Dunham, Henry Oliver "Hank" Hansen, who raised the US flag at the battle of Iwo Jima; and Patsy Mink, who was Hawaii’s first female Congresswoman.

We'll guide you to The National Memorial Celemtary of the Pacific on our Honolulu's Backyard Rainforest Tour.