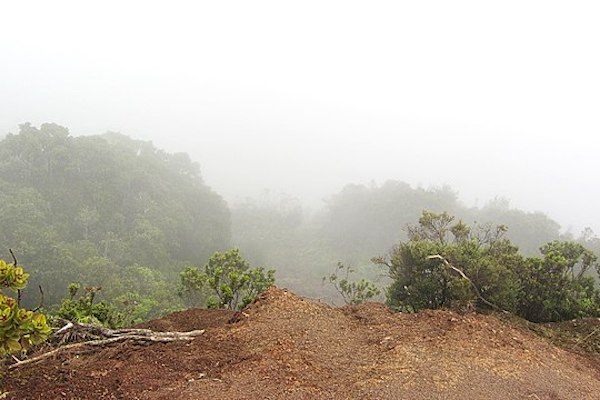 There's a really cool Hawaiian legend that explains why trees don't grow in Koke'e, found in northwest Kauai. Now, as the story goes, there was once a robber named Kanaloa Huluhulu. Now that translates into 'a tall hairy man.'

He was kind of known as a Hawaiian Bigfoot. Well, it was said that the bigfoot would hide himself in the woods of Koke'e and then pounce on unsuspecting travelers to rob them. Now, this went on for a whole lot of years until the ruling chief got word... and he decided he was gonna take care of it.

A sheriff was sent out to capture the bigfoot robber. Upon finding him, the sheriff had a long battle and he eventually subdued and killed the Bigfoot. And to make sure this Bigfoot was really dead, the sheriff had his head cut off. And on the way down the mountain, he threw the head into the canyon.

But just as the sheriff had suspected, this bigfoot was no ordinary man!

He was actually a powerful demigod - or half man, half god. Now that evening, the bigfoot came back to life, but he couldn't find his head. So the headless body tore up all the trees by their roots, trying to find his missing head. And so there we have one explanation of why no trees grow in Koke'e.

Want to visit this Koke'e and see for yourself?

Check it out on our Waimea and Na Pali tour!