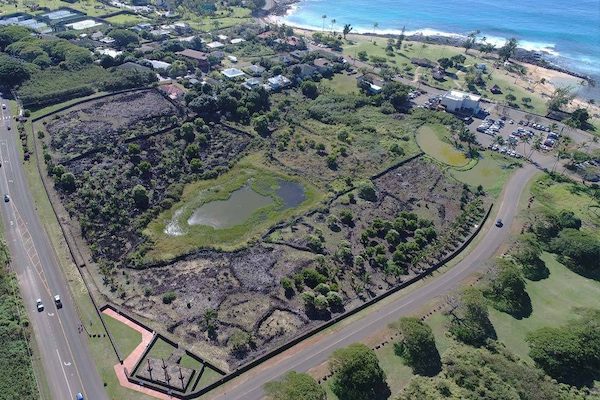 The Kaneiolouma Cultural Complex: one of the most notable cultural sites on Kauai. Active archaeological research and excavation are still being done at this site, so please be careful and mindful of your surroundings. It is only a short stop, but is really helpful in explaining the cultural significance of this area.

Now, you see those tall pole-like statues that we sometimes call “tiki”? In Hawaiian, they are actually called ki’i. The reason why they seem to always have an angry face, is because they are the impersonation of the war god Ku, who is thought to be powerful and fierce.

Spanning 13 acres, the Kāneiolouma Complex, or  Ke Kahua O Kāneiolouma,is a Hawaiian cultural site where the remnants of an ancient village have been discovered.

The efforts to restore this complex have been going on for more than 10 years. Among the discoveries, are structures dating back to the 15th century. For example, there is a system of walls and terraces to grow and water crops. There are also remains of houses, fishponds, religious shrines and altars with carved idols that have lain undisturbed for centuries. At the center of the complex is an intact arena where sporting events were held! There is also a fresh water spring known as waiohai.

Eventually, when the restoration efforts are finished, Kaneiolouma will be the first ancient Hawaiian village in the state to be completely restored.

The descriptive plaques here are really interesting, so be sure to get out and explore a little when you visit!

It's a stop on our Poipu and Koloa Tour!