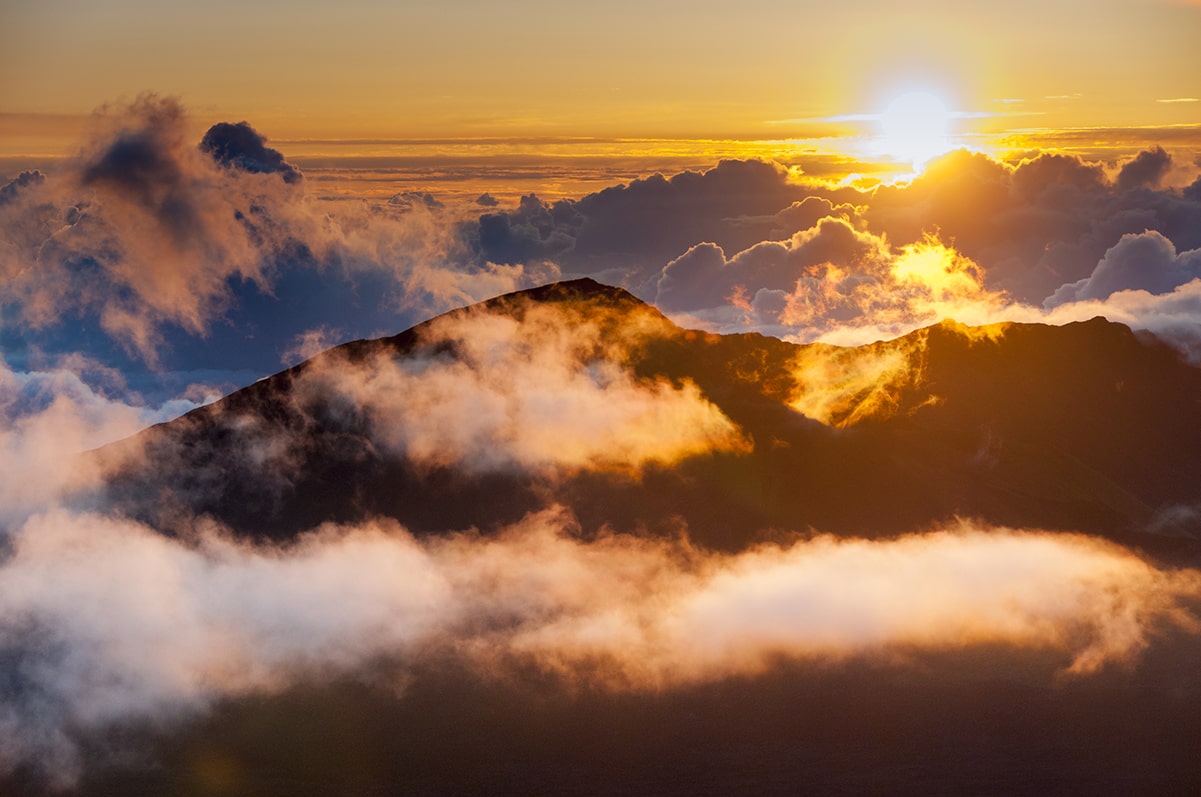 Watching the Sunrise On Haleakala with Shaka Guide

Rising in the predawn darkness is a surreal experience no matter where you are. But in Maui—one of the world’s most isolated islands—that dreamlike state takes on a different pitch. The stars are so close you can practically touch them. All the birds are hushed. You will only hear the sound of a few lone cars and the buzz of coqui frogs. Have you ever watched a sunrise in Haleakala?

But it’s a small price to pay for what awaits: Watching the sunrise In Haleakala summit. Considered a bucket-list essential for Valley Isle visitors, dawn from the volcano’s rim has been raved about since the invention of ink. And while I first saw the spectacle as a child—it may have been the moment Maui made its way into my bones—today I set out for the third tallest mountain in Hawaii.

You might assume that Haleakala is no stranger to me. I was raised on One'uli Beach below the volcano’s southern slopes. Makena was a rugged region then, the barren lava that made up my backyard evidence of Haleakala’s most recent eruption. Homes were few and far between. The beaches were often empty. And one of my closest neighbors as a child, or so it seemed, was the steadfast, imposing mountain behind me. 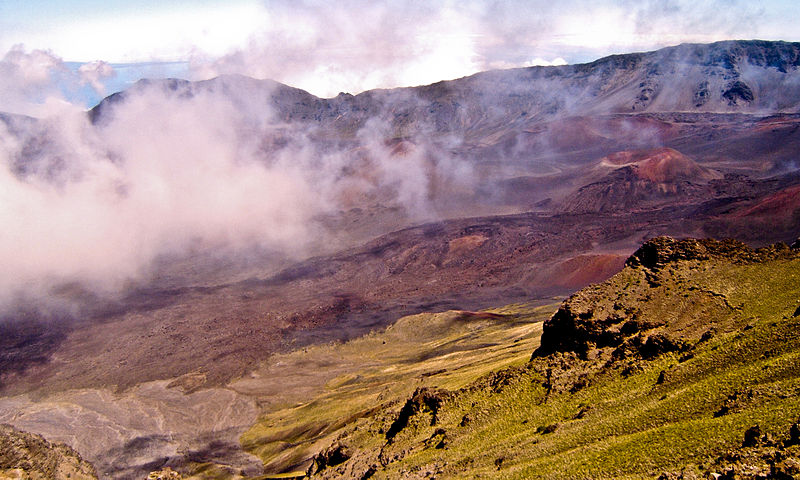 Little more than ranch land existed between our home and Haleakala. But, the privately-owned terrain that separated us made visiting “the crater” a rare treat. It was an excursion to be had with out-of-towners, a camping trip we’d take when we grew tired of the beaches (it happens), and the refuge I escaped to in a teenage fit. After all, there are only so many spots one can run away to on an island.

In the pre-internet age in which I grew up, what we knew about the mountain that towered above us was only found in culture classes, dusty geology books, and retelling from older kama’aina.

During recent years, however, the sunrise In Haleakala has exploded in popularity. The summit receives 1.5 million visitors per year. It was chosen as one of 16 national parks for a specialty stamp. Guidebooks tout its sunrise. Concierges from Kihei to Ka’anapali insist it’s a Maui must. Cyclists praise it as one of the finest climbs in the world. And, as of 2017, viewing daybreak from its summit began requiring advanced registration. It’s enough to make a local girl feel a little resentful, if not jaded by the mountain. 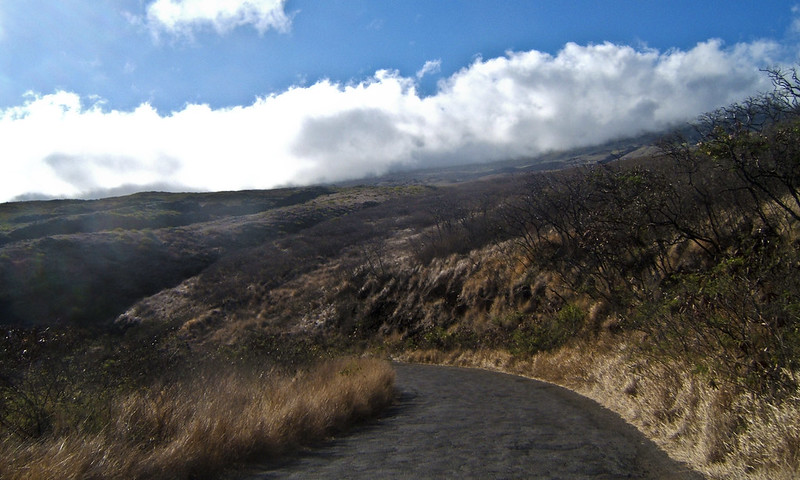 The Road to Haleakala

Leaving Wailea on the south side, you wouldn’t know how coveted the sunrise In Haleakala have become. The roads are mostly abandoned. Lights from vacant gas stations and plazas give the nighttime sky a lonely, frantic glare. When the voice of the Shaka Guide fills my truck, the narrator feels like a long lost, and very welcome, friend.

Created by a local husband and wife team, Shaka Guide is one of those brilliant apps you always knew you needed but didn’t realize as much until it appeared on your radar. Blame my country upbringings (read: the boonies), but I’m one of those people who skirts crowds, avoids group outings, and has taken a guided tour all of once in her 38 years. Fellow solo trekkers will find in Shaka Guide what I’ve long sought out in places both foreign and familiar: a knowledgeable, friendly local who will show me around and give me the goods on a place, but leave me in my peace to enjoy it. 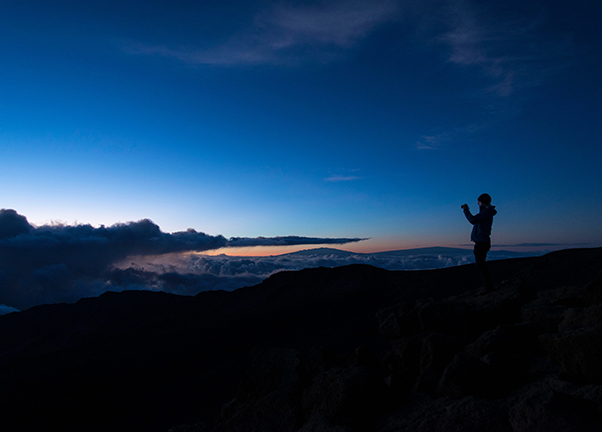 View from the top | Photo by Elise St. Clair, via Unsplash

Because even I as a writer—by nature a solitary creature—need companionship, particularly when it comes to ascending one of the world’s steepest auto gradients to watch the sunrise In Haleakala. (Believe it or not, but the road to Haleakala climbs 10,023 feet in a mere 38 miles.) And as I begin the tour, something in me settles. Shaka Guide’s narrator has a fondness that warms me while the scenery unspools in front of my headlights. There’s modest Pukalani, the “hole in the heavens” that manages to evade the clouds; Makawao to the left, the paniolo town that receives a surplus of Maui’s rainfall. Anecdotes and facts that aren’t revealed in those guidebooks are seamlessly woven into Shaka’s turn by turn directions.

At Shaka’s suggestion, I roll down my windows and let in the sharp, clean scent of eucalyptus. I listen. The lei of clouds, the myth of Namaka, Pele’s sticks—how could I have forgotten all of this? By the time I’ve navigated the twenty-plus switchbacks on the way to the summit, I’m utterly smitten as I rediscover Haleakala’s fusion of legends, history, and science. Jaded no more. 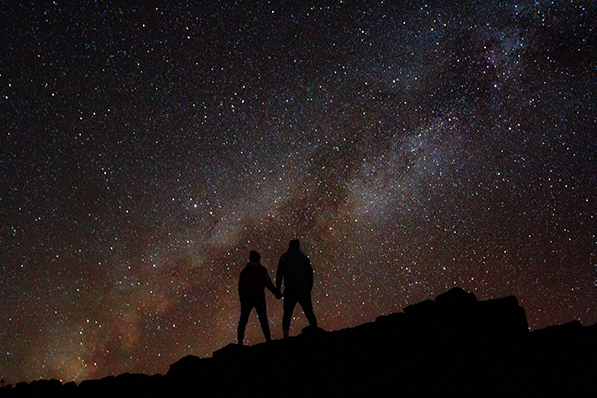 The view from the top

If the stars seemed close enough to touch in Wailea, they get tangled in your hair at Haleakala’s summit. Known as one of the best places on Earth to view the heavens, Haleakala is home to “Science City,” a collection of observatories, funded in part by the U.S. government, that tracks the solar system (and whose astronomers released the world’s biggest map of the cosmos). In another hour, the white domes of the observatories will become clear. For now, though, there is the starlit sky—grand, gorgeous, and commanding nearly all of my attention until the sunrise In Haleakala.

The rest of it is spent on eyeing the horizon—and on managing the cold. While I’ve gone through multiple microclimates on my ascent, from the beachy temps of Wailea to the winds of Pu’unene and the coolness of upcountry, Haleakala presents a whole new atmosphere. The wind isn’t just brisk—it’s downright bracing. Three weeks earlier, rumor had it we’d see snow on the summit. I expect an entire flurry of it as I wait with the other bleary-eyed onlookers, stomping in my seldom-worn hiking boots. In a word, it’s cold. Haleakala is an alpine desert, after all, so high in the sky it claims its own climate zone. 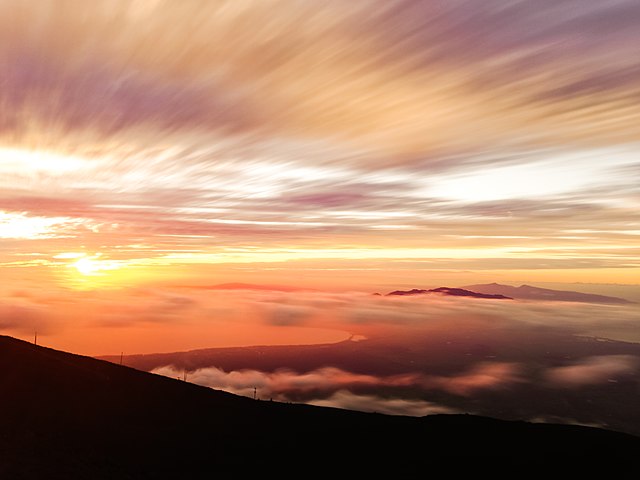 Watching the Sunrise in Haleakala

But a different kind of shiver occurs with the first light. The clouds roll beneath us, like whitewash in the sky, as the sun begins to crest, its rays banded in a mammoth, daylight star. Lava outcroppings and cinder cones become backlit before the sky is painted with colors whose names I’ll forget until I’ve started my descent: apricot, navy, blush, slate.

Hawaiian chanting is interrupted by a collective gasp. And though I’m not one for crowds, while bathed in this magnificent light, there is the sudden sense of unity. That we are fortunate beyond words to be witnessing this most astonishing of marvels.

As the sun shifts and reality comes into focus, people trudge back to their cars, their breath vaporized. I, too, head back towards my truck.

In another hour, after I’ve had a cup of the coffee, and have warmed up a little, I’ll get out again and explore the park.

I’ll see the resurgence of the ‘ahinahina, the spiky succulent whose population dwindled when the human population on Haleakala rose.

What about the rusty reds of the volcano, and the great, stark basin of its eroded floor? I’ll begin back towards home, the island waking up around me as I drive and laugh as Shaka Guide’s narrator helps me brush up on my Pidgin.

But for now I sit, humbled, staring out at the vastness around me—this province of the gods, this guardian of my island home, both stranger and neighbor; this most sacred of Maui’s sites: Haleakala mountain.

When you're in Hawaii, please be respectful of the land, animals and plant species you come across. Hawaii's ecosystems are fragile. You can show your aloha by leaving the trail better than you found it. Always dispose of your trash properly and never trespass on private property. If there are no trespassing signs, they are there for a reason! For more on how to be a safe and responsible traveler when you visit Hawaii, click here.

RELATED: Haleakala Sunrise & Sunset: Everything You Need to Know