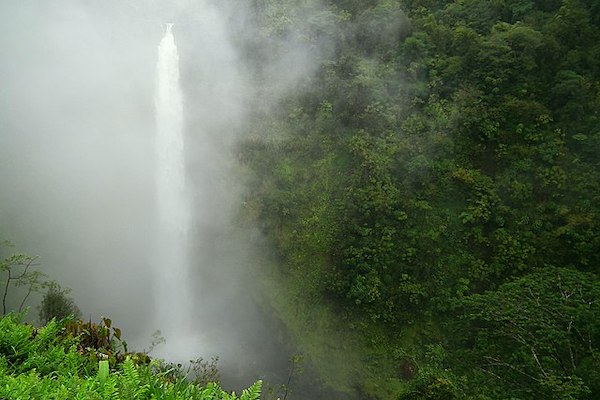 Akaka falls often appears in myths, and it's a very special place for the Hawaiian people. Here's one of the many legends about the falls.

Back in the days before recorded time, humans were recognized as a part of nature, and many of the gods also lived on the island. Among the humans, there was a chief warrior named Akaka. Who was young, tall, strong, and of course he was good looking. With his reputation, he attracted many women. One day, while his wife was away from home, a girlfriend visited Akaka. However, his wife unexpectedly returned. So they snuck out the back door and left their house. They passed through the valley, and then he returned home, pretending that he was sick.

However, he was filled with guilt and shame that he had deceived his loving wife who trusted him. Unable to live with what he had done, he decided to throw himself off a cliff. His wife followed him to the cliff to tell him how much she loved him and that she would forgive him completely. But unfortunately it was too late.

Akaka had already jumped to his death. Her sorrow was so great, she could not stop crying. Her tears dropped off the cliff and they magically changed into the waterfall we see today. She continuously pleaded for Akaka to return, but it was hopeless. She was then transfigured into a rock at the top of the cliff, where she still remains to this day.

Want to see the falls for yourself?

Our North Island Jungle Adventure Loop tour takes you there!