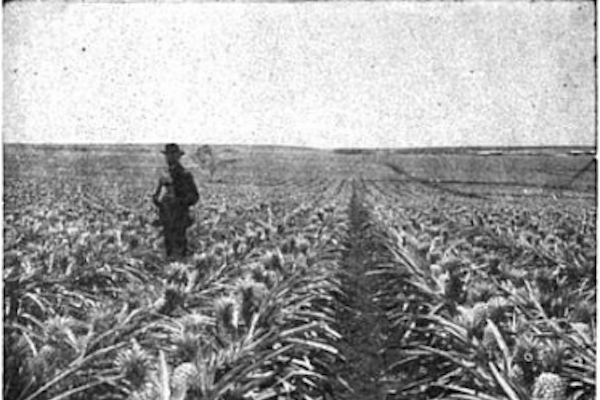 A pineapple field in Hawaii around 1920 / Frank Coffee, Public domain, via Wikimedia Commons

A pineapple field in Hawaii around 1920 / Frank Coffee, Public domain, via Wikimedia Commons

In the Past, Hawaii Exported nearly 90% of the World's Pineapple!

Have you seen Pono Kai hotel? This once was the sight of a massive pineapple cannery! Let me give you a little backstory!

The glory days of sugar plantations didn’t last forever. Eventually, other countries that could produce sugar at lower costs were able to outcompete Hawaii.

Of course, it didn’t take sugar businessmen long to adapt, switching gears to... you guessed it! The pineapple! Since then, the pineapple has become an iconic symbol of Hawaii.

So aggressive was the plan for pineapple cultivation, that soon it became the number one industry in Hawaii. At one point, Hawaii produced more than 90% of the world’s pineapple. Wow! That sure is hard to believe! In Kapa’a, a large pineapple cannery used to stand at the Pono Kai resort, where pineapple was canned and shipped all over the world!

In the process of canning pineapple, the crown and skin must be cut off.  Any guess where they used to dispose of all those scraps? Well, it was decided that they would just dump it all that right into the ocean! Sounds like a great idea... right? Nope! It’s said that on some days, the air in Kapa’a town would be filled with the stench from all the rotten fruit washed up to shore. Ew…so gross! Luckily, we have laws against that kinda thing these days!

We talk about it on our Wailua Valley and Waterfalls Tour!